This is the final Chapter in AAHA Learning's series on discrimination, stereotyping and prejudice. We hope you enjoyed these posts.

TEARS OF JOY FOR AN EXILE RETURNING AFTER 28 YEARS TO OBSERVE A MARVEL
Reprinted from the Guardian, 30 April 1994

The last time I saw Poen Rah Dong and Aubrey Apples was when they waved my family a tearful goodbye into exile at Pretoria railway station in March 1966. A few tears were shed again when I saw them after flying in as an international parliamentary observer last Sunday. All the children and grandchildren were lined up to greet me. Some proudly bore the names of my mother and father who had been harassed, jailed and banned in the grim early 1960s, finally to be forced to board the train from Pretoria to a ship in Cape Town on a one-way exit permit.

This first-ever democratic South African election has been a marvel. My parents voted – for the ANC – in London, having discovered their old South African identity cards. I visited polling stations in and around Johannesburg, metaphorically pinching myself to make sure I wasn’t dreaming. After all those years, all the bitterness, the killings, the violence, the lives wasted away in prison and poverty, here it was actually happening before me, constitutional apartheid being exorcised.

Even the notorious white police force seemed happy and relaxed. The letter bomb I had received from their security wing, Boss, in June 1972, and memories of being labelled South Africa’s “Public Enemy No 1” after leading the British campaign to stop all-white sports tours in 1969-70 had made me pretty apprehensive about this visit. But the white policeman welcomed me as an election observer, even allowing a family photo as I stood amongst them, machine guns at ease. They were willing the election to succeed, relaxed in the sunshine, telling me how relieved they were it was all going peacefully as they guarded the democratic process which was ending their brutal decades of privilege and power.

The sense of joy gripped everyone. Blacks and whites queued together for hours, chatting for the first time as voting equals. The election became a healing process. ANC, Inkatha and National Party scrutineers chattered happily together in polling stations. A white NP councillor, schooled in years of apartheid rule, recognised me. "Are you the Peter Hain?" he asked in amazement. "Can I have your autograph?" Not so many years ago, he'd have cheerfully had me knee-capped. Ali Bacher, cricket supremo of the new United South African Cricket Board, welcomed me for the first time at Johannesburg's Wanderers Stadium. He'd been captain of the 1970 Springbok side stopped from touring by our campaign of direct action protests.

A generation of some of the world's finest cricketers, including my boyhood hero, Graeme Pollock, had been forced into isolation. But Bacher showed no bitterness, "You were right, I was wrong," he volunteered for the first time on camera as I interviewed him. He went on to admit how sporting isolation had forced change, even though he had resisted the final process of non-racial cricket right up to organising the abortive Mike Gatting rebel cricket tour four years ago. One of the real victims, Khaya Majola, would certainly have made the Test team if apartheid had permitted. Now Bacher’s Director of Cricket Development in black townships, he enthusiastically backed my offer to welcome South African cricketers when they arrive in Britain this June – the first such tour since the one stopped in 1970.

And presiding over it, a man whose time has come, Nelson Mandela gave me a few moments as polling began. "Maybe I should be jumping around with joy," he remarked, "but I just feel at peace." Tranquillity personified as the burdens of power and the enormous tasks of reconstruction beckon. Out there somewhere is the old South Africa. The white extremists of the AWB bombed the ANC's Johannesburg office and narrowly missed our British MP observer group as we arrived. Their terrorism is still killing and maiming. But it is apartheid in rigor mortis. The New South Africa has stepped forward with a verve and excitement that is hard to believe but wondrous to behold.

Ruby Bridges was a six-year-old African American girl in 1960, when she was one of the first children involved in desegregating the public schools in New Orleans in the United States. Every day she went to school accompanied by US federal marshals to protect her from the verbal abuse and death threats of crowds opposed to school integration.

A prominent psychiatrist examined her repeatedly over many months and marveled at finding her truly cheerful and serene. Then he discovered that she prayed twice a day for her tormentors. When asked why she did this, she answered, "Because they need praying for." She explained, "If you're going through what they're doing to you, you're the one who should be praying for them." She had learned in church that Jesus went through a lot of trouble. He said about the people who were causing the trouble, "Forgive them because they don't know what they're doing" (see Luke 23:34).

As an adult, Ruby is a mother and is active in public service.
Posted by Bruce Copley at 3:04 AM No comments:

Being able to instantly access what individuals and groups are thinking, feeling, wanting, needing, concluding, fearing, grappling with, etc, etc is something that really boggles my mind. Besides making visible what is normally invisible and transforming assumptions into realities this wonderful technology does something even more significant and that is to access and integrate the amazing power of the collective intellect, experience and knowledge of any number of people and to do so in an incredibly short space of time.

What I also really enjoyed about what David Wilson and Brett shared with us was the way in which responses to simple multiple choice questions triggered many other questions, comments and insights. From the experience we had it is obvious that the benefits of this technology hinge on the way in which the questions are posed and the honesty and accuracy of the responses received. I will certainly be exploring this again in the near future and if you are inclined to want to do the same here is the David Wilson's information:

The feedback we received after the discrimination experience is presented below:

ANSWERS TO THE FOLLOWING QUESTIONS WERE:

A revealing and worthwhile experience?

A powerful antidote for discrimination and prejudice?

Would have preferred to have skipped this experience?

An experience I will always remember?

An experience everyone should have? 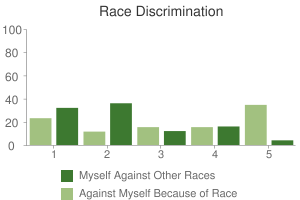 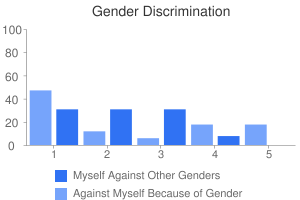 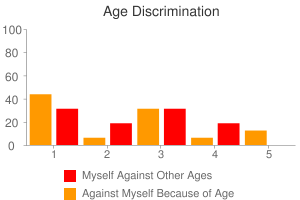 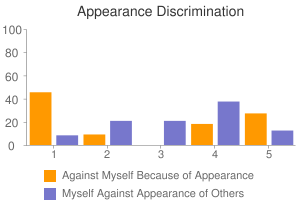 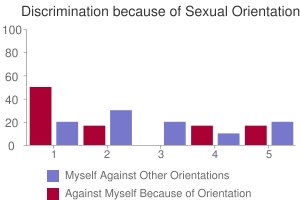 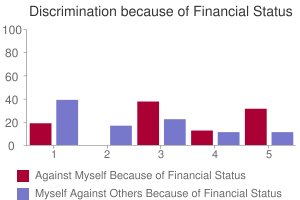 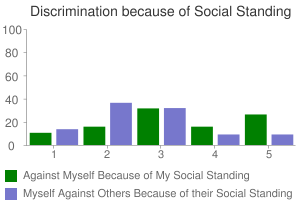 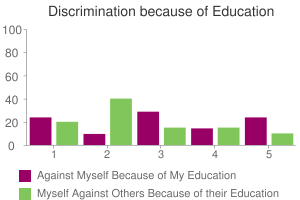 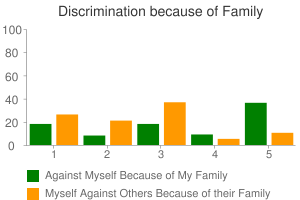 Posted by Bruce Copley at 3:23 AM No comments: