As promised, here is the second chapter in our series about discrimination, stereotyping and prejudice.  Stay tuned for Chapters 3, 4 , 5 and 6, at two-weekly intervals.

A STEREOTYPE is a fixed perception, belief, paradigm, attitude and/or generalisation about yourself, others, a concept, a place or an event.
A STEREOTYPE has the following ADVANTAGES:
a)         Helps you create boundaries
b)         Assists you to make sense of your world
c)         Serves as a base for your behaviours and actions.
A STEREOTYPE also has the following DISADVANTAGES:
a)         Can block or distort your view of reality or the truth
b)         May seriously hamper communication and co-operation
c)         Can foster aggression and promote competition
d)         May give rise to PREJUDICE and DISCRIMINATION
Bear in mind that since we all belong to specific groups, it is easy to compare our group to other groups and favour the one we belong to.  Whenever any stereotype becomes staid and inflexible and your actions/words arising from them hurt, disadvantage or injure others, you are guilty of discrimination and prejudice.
Some important points to remember are :

Jesse Jackson's quote : "The only justification for looking down on someone is when you are about to pick them up", constitutes a powerful antidote for prejudice and discrimination.

Posted by Bruce Copley at 12:46 AM No comments: 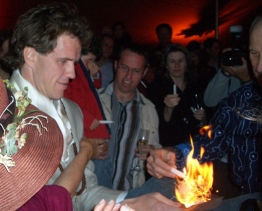 Is your forthcoming conference, launch, indaba, wedding, party or reunion  in danger of being conventional, mundane, boring, more of the same and  devoid of any originality, essence and meaning?
Dr Bruce Copley the internationally acclaimed holistic edutainer and his talented associates masterfully transform any occasion or gathering into an extraordinary and unforgettable experience. This is achieved through their unique holistic approach that integrates state of the art equipment, cutting edge techniques and ancient light, fire, sound, colour, story, poetry, music, rhythm and nature practices and customs.
Life is not measured by the number of breaths you take,
but rather by the moments that take your breath away!

FEEDBACK FROM SOME OF OUR CLIENTS
Thank you for making our wedding a very beautiful and unforgettable experience for us and all our guests....Dr Bernard Brom
"You crafted a magical mix of atmosphere and melody which effortlessly complemented the setting and proceedings of our wedding. Your enthusiasm for what we wanted, your willingness to search for what would work and your keenness to partake in the whole event were  a great gift to us.”…Mr  Malcolm Fair
Inviting you to bring your magic to my 40th birthday celebration proved to be a huge blessing for us all.  You are truly a master of your trade......Mr Heine Du Toit
For further information contact Dr Bruce Copley on tel 083 459 9894  or bruce@aahalearning.com  or www.aahalearning.com
Posted by Bruce Copley at 12:43 PM No comments: